October: The header today is of my table top in the studio, which I posted on October 11th, the day before we left for our two week visit to England and France, and the day the studio was tidied up for the first time in months as you will have seen from the photos that day.

The previous week we enjoyed Autumn in all its glory on our final walk along the Admiralty Trail before leaving on our trip, a walk I posted about on October 5th for the Weekly Photo Challenge: Boundaries.

The table top and the trees seem to complement each other just perfectly, which I have to add only became apparent as I composed today’s post; serendipity working its magic once again.

Those of you who joined us, albeit virtually, on our European adventure will know what an unforgettable time we had.  The photos I posted each day said it all so as a little reminder here is a slideshow of some of my favourites, many of which became paintings on our return.  If you are visiting thechangingpalette for the first time and would like to learn more about the places we visited in London and the beautiful Périgord region of south west France why not browse through Days 287 to 299.

October was not entirely without its paintings.  These are from the beginning of the month before we left.

August and September: Lots of great memories from the warm, long days of summer and time to put into practice my Lessons from the Great Masters. One particular sunny weekend we had a blissful early morning walk along Spanish banks and through the shaded Admiralty Trail in the Pacific Spirit Regional Park. Back in the studio I tried to re-capture English Bay with the Vancouver skyline, and the shimmering canopy of trees and leaves along the trail, in both watercolour and pen and ink. 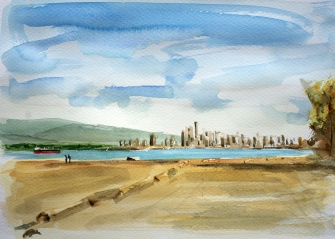 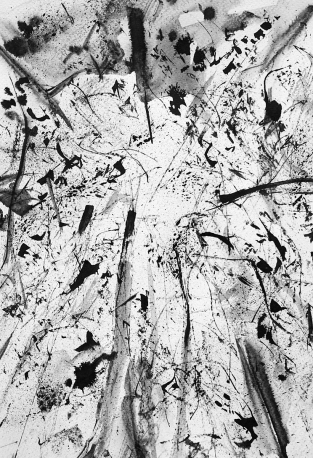 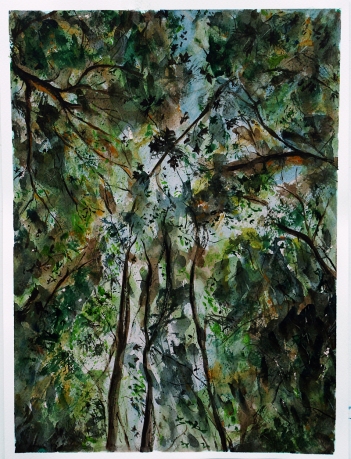 At the end of August a visit to see our granddaughter included a glorious day at the beautiful Butchart Gardens on Vancouver Island.

…followed by a drive to Whistler on Day 250 with spectacular views you may remember of the Fraser River and Coast Mountains between Lytton and Lillouet.

Throughout the two months I painted most days and surprised myself at continuing to meet my goal from New Year’s Day.

One final painting to join the favourites, this one of the wedding bouquet carried by our daughter a year ago which I painted for her first wedding anniversary on August 24th. 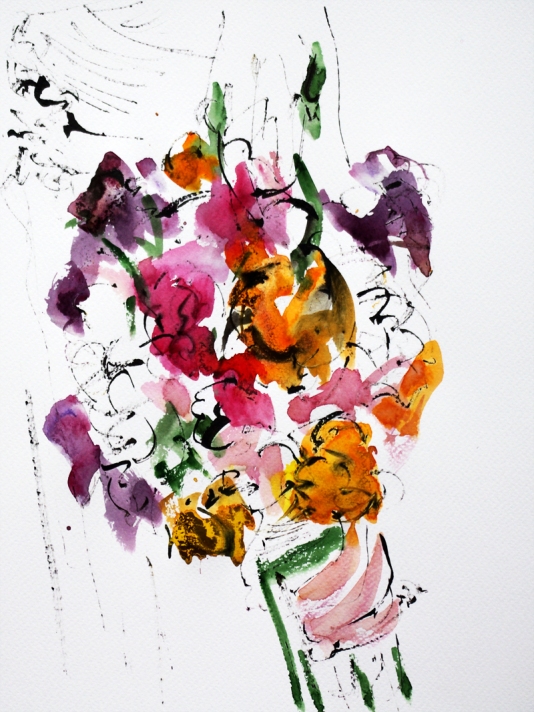 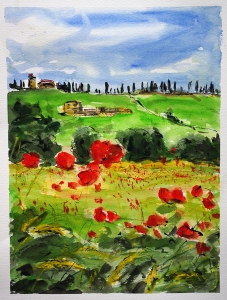 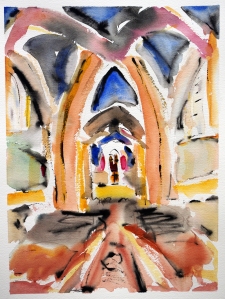 …and in the process quite serendipitously created a series of palette mosaic fans made from the colour test strips from all of the Italian paintings.

Towards the end of June I began my journey through the Tate Watercolour Manual: Lessons from the Great Masters, which I had been introduced to by the wonderful Debi Riley whose blog The Creative Zone is a treasure trove you should all explore.  Over the next four weeks I worked my way through the book and learnt so much in the process… 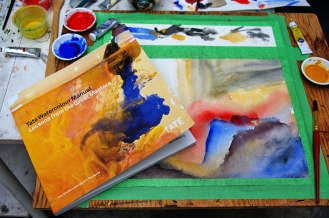 …posting another wall of paintings at the end of my journey on July 24th, Day 205, a post that also included a slide show of all the pieces. 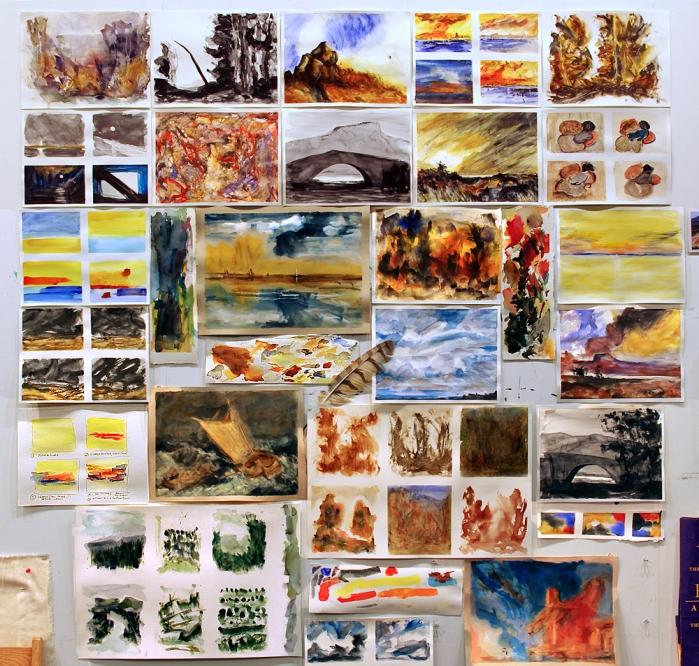 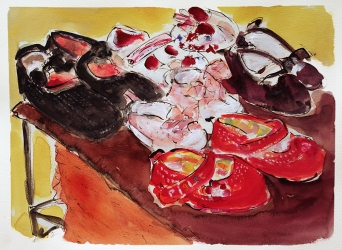 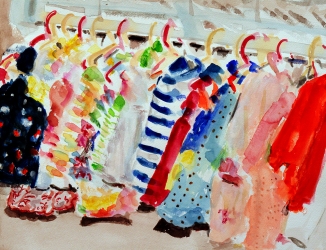 …the dresses and shoes in my granddaughters closet. 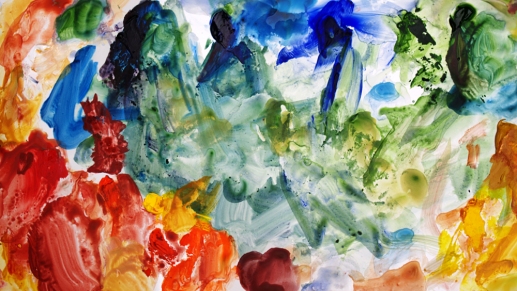 May: After our amazing travels in April, studio time in May was all about expressing on canvas and paper the memories that were still fresh in my mind. My post on Day 135 brought them all together on the studio wall where they stayed for a day or two. 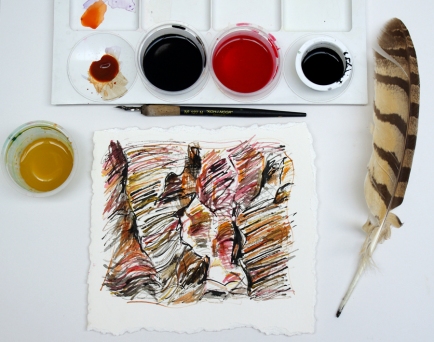 For the rest of May it was all about Bella Italia as I re-visited my journal from 1999-2000 and left the canyons of Arizona and Utah for the beauty of our favourite country, Italy.

Finally, perhaps my favourite image from the month posted on May 15 in response to the Weekly Photo Challenge: Enveloped, the treasured letters from my father to my mother a few weeks before their marriage in 1936, which I titled for obvious reasons my dearest sweetheart.

A special image full of love with which to wish you and your loved ones a very happy Xmas Day. 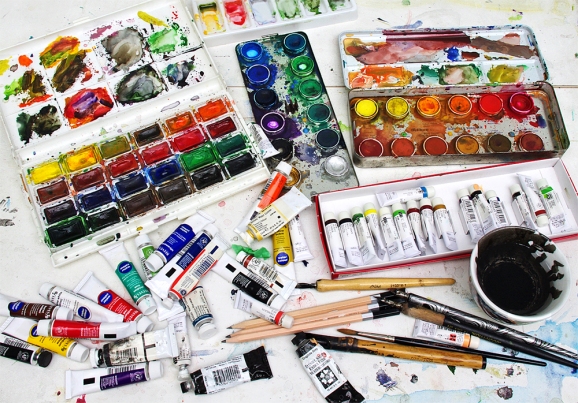 April: What a sensational month this was in every way and in the true meaning of the word in which our senses were stimulated by landscapes full of color, light, shadow and depth, with vistas stretching as far as the eye could see in Agassiz, British Columbia or Bryce Canyon, Utah and no further than the length of one’s arms in Antelope Canyon, Arizona.

The memory of the Tulips of the Valley Festival in Agassiz BC lingered for days and resulted in some joyful paintings later in the studio. If you would like to relive the day visit my slideshow of those glorious fields of colour that I posted on April 12th under the title Petal Power.

But as you know more was yet to come. What can I say about our visit to the canyons of Arizona, Utah and Nevada? I had seen so many photos of Antelope Canyon and finally had the opportunity to see for myself.  Nothing compares to being  enveloped by the natural beauty that surrounds you, which can only be described as simply awe inspiring.  The galleries of photos on Days 109 and 110 say it all; here are just three from them. 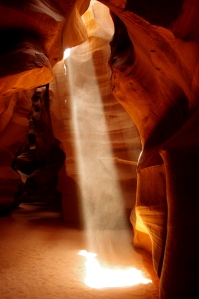 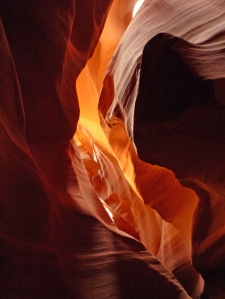 …and my treasure from the trip this Great Horned Owl feather from Owl Canyon. 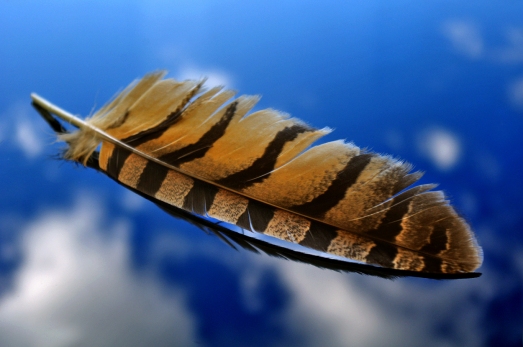 Finally a painting from the month that joins my favourites of the year and titled Blurred Lines. The steps of its development can be seen on Day 95.

March: Perhaps the easiest way to remember March is to see my eclectic media library for the month with its mixture of palettes, pen and inks, light painting and monochrome photography, watercolours and acrylics. 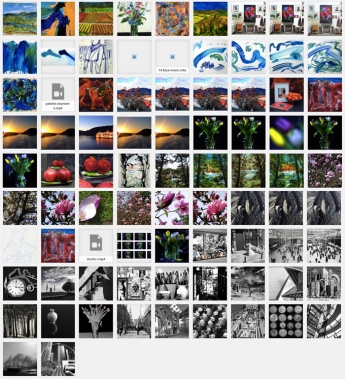 I’m going to pick three of my favourite images from the month.  The first is a “fence” made from the juxtaposition of palette fragments from palette photos saved from the beginning of the year. 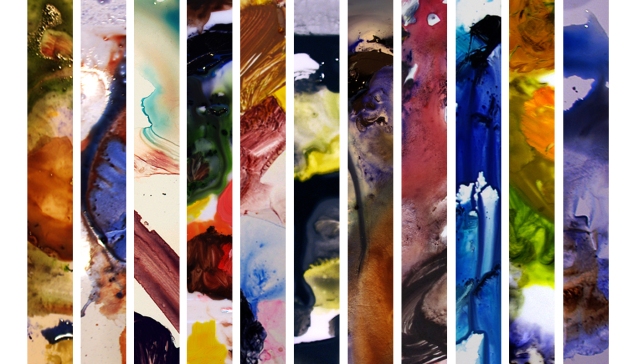 The second is this photograph of my treasured grandfather’s watch that I included in a gallery on March 1st of all the monochromes photos I had submitted to Leanne Cole’s wonderful Monochrome Madness blog during 2014.  I posted colour photos of the watch later in the year for a Weekly Photo Challenge in September that I entitled Golden Time… 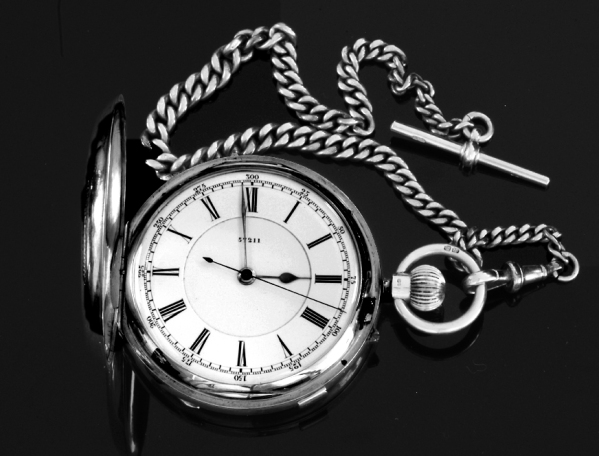 …and the third is another photo from that MM gallery as it seems an appropriate way to wish everyone the Happiest of Holidays with Xmas Eve only a day away.

February: New York, New York was definitely the highlight of the month. After our disappointment at having to cancel because of the weather in January we made a last minute decision to have a long weekend and took the red eye flight on the evening of Thursday the 6th. We arrived in New York early the next morning and didn’t stop for three days, taking in the Matisse Cut-Out exhibition at MOMA on Friday, the 9/11 Memorial site and Museum on Saturday, and the Metropolitan Museum on Sunday. The Freedom Tower overlooking the Memorial site was a powerful image that I tried to capture in the studio on our return.  I wrote that it seemed to represent not only freedom but so much more: defiance, resilience, endurance, hope and above all remembrance.

On the 18th I posted about our visit to MOMA which I cheekily entitled MOMA Mia. If you haven’t seen it take a look as you might enjoy the slide show of some of my favourite pieces in the museum.  I also posted a slide show of our afternoon at the Metropolitan Museum entitled Well Met on the 20th; cheesy titles I know. 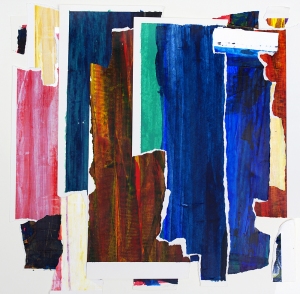 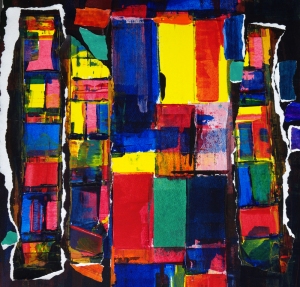 The month also include collages and my early attempts at light painting photography, which definitely improved as the year continued.

January: As I started my 365 day challenge and the days moved from single to double figures I wondered if I could really achieve my goal of posting every day for a year. Now, looking back with amazement as it looks as though I might actually succeed, there have been so many days filled with happiness, joy and at times a real sense of achievement but also too many others filled with a weary sadness, days that have now become deeply embedded in our collective consciousness. The year was only seven days old when we all became Charlie, as I wrote on the studio floor on January 7th and on my palette four days later when the world showed its solidarity with the millions marching in Paris and France on January 11th:

I felt that the world stood still in sympathy and remembrance for a few days as we all collected our thoughts before moving on with our lives. I certainly did and was more determined than ever to ensure that my goal was met.  The studio became my sanctuary and as the year progressed I found I was creating more and more freely and often with surprising results.

Over the next few days I’ll revisit some of those creations, and there seem to be a surprising number of them. 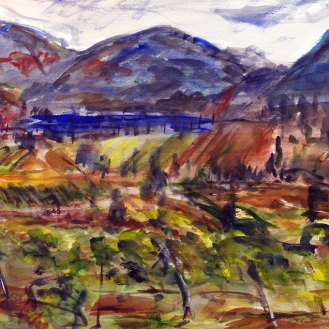 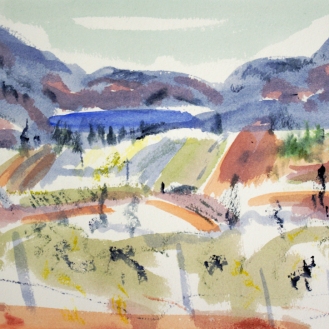 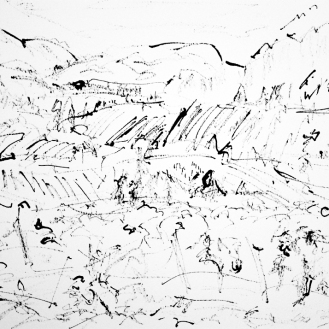 Okanagan Falls was a perfect subject with which to begin the year reintroducing me as it did to my watercolors, acrylics, brushes, pens and inks.

This homage to my hero Henri Matisse I posted on January 24th in anticipation of our visit to New York to see the exhibition of his Cut-Outs at The Museum of Modern Art, which we almost didn’t make because of the severe winter weather on the East Coast. Although we had to cancel all of our bookings we were able to reschedule and New York, New York became the highlight of February, of which more tomorrow…