Dedicated to the memory of Samuel Paty

Once again the Place de la République in Paris today became the “capital of the world” to use the words of Francois Hollande after thousands gathered there and throughout France to protest and remember those lost after the Charlie Hebdo attack over five years ago.

Today they gathered in Paris and across the country to remember Samuel Paty the teacher so cruelly murdered in an horrific terrorist act on October 16th. The words I wrote on my post after the Charlie Hebdo attack on January 15th 2015 were very much in my thoughts today:

In the studio today my thoughts are very much with all the citizens of this great city as they walk in their millions for remembrance, for freedom, for tolerance, for love, for mankind, for the future.

Looking again at my post from five years ago… 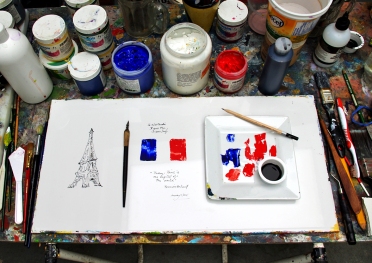 May Samuel Paty rest in peace.