Can there be a more iconic room than Vincent Van Gogh’s bedroom at the Saint-Paul Asylum, Saint-Remy, France where Van Gogh entered voluntarily as a patient on May 8, 1889 and remained until May the following year. During this time he painted the gardens, with their wheat fields, olives groves, irises and sunflowers, all of which he could see from his bedroom window. 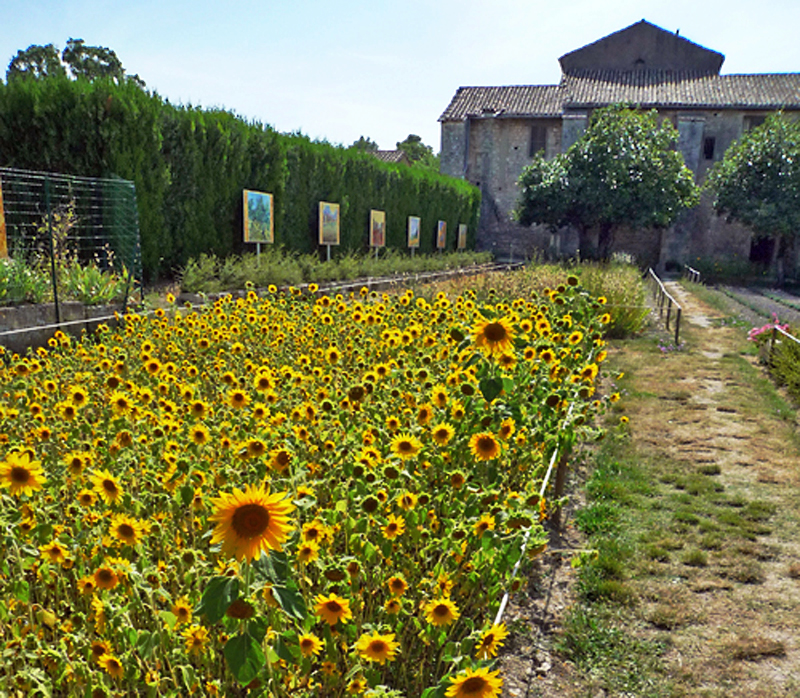 The Asylum was originally an Augustine Monastery built in the 12th century with its cloisters maintained so beautifully to this day.

Here is an excerpt from a letter he wrote to Emile Bernard about his painting of the gardens, and as you read his words enjoy the classic song by Don Maclean, “Vincent”, written as a tribute to Van Gogh and released in 1976.

“A view of the garden of the asylum where I am, on the right a gray terrace, a section the house, some rosebushes that have lost their flowers; on the left, the earth of the garden – red ochre – earth burnt by the sun, covered in fallen pine twigs. This edge of the garden is planted with large pines with red ochre trunks and branches, with green foliage saddened by a mixture of black. These tall trees stand out against an evening sky streaked with violet against a yellow background. High up, the yellow turns to pink, turns to green. A wall – red ocher again – blocks the view, and there’s nothing above it but a violet and yellow ochre hill. Now, the first tree is an enormous trunk, but struck by lightning and sawn off. A side branch, thrusts up very high, however, and falls down again in an avalanche of dark green twigs. This dark giant – like a proud man brought low – contrasts, when seen as the character of a living being, with the pale smile of the last rose on the bush, which is fading in front of him. Under the trees, empty stone benches, dark box. The sky is reflected yellow in a puddle after the rain. A ray of sun – the last glimmer – exalts the dark ocher to orange – small dark figures prowl here and there between the trunks.” 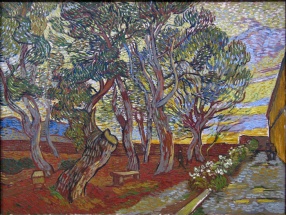 The Garden of Saint-Paul Hospital October, 1889

“You’ll understand that this combination of red ochre, of green saddened with grey, of black lines that define the outlines, this gives rise a little to the feeling of anxiety from which some of my companions in misfortune often suffer, and which is called ‘seeing red’. And what’s more, the motif of the great tree struck by lightning, the sickly pink and green smile of the last flower of autumn, confirms this idea”.

Visiting Saint-Paul-de-Mausole, walking in the gardens, and standing in the room of one of my artistic heroes provided so many moments to reflect on the genius of one of the nineteenth century’s greatest artists, but also of the sadness and struggles of his life.